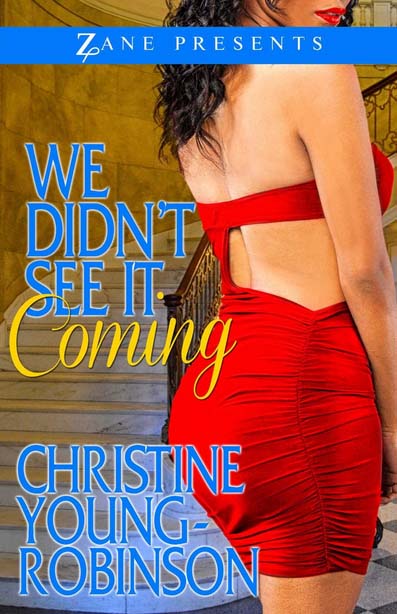 Coming in September is a brand new novel off of Zane’s Strebor Books, written by author Christine Young-Robinson, titled “We Didn’t See It Coming”. I got an exclusive before the book’s release, and the author gives a bit of BOOK TEA for avid readers to get excited about!

1.The first four words I notice in the description are “tragedy, scandal, secrets and betrayal, and those words alone are enough to grab the attention of many fiction readers. Tell us about the main characters, the sisters – Milandra, Noelle, and Kenley – since it seems like they are about to get caught up in some drama that they may not necessarily want?

Christine Young-Robinson: The Houston sisters come from wealth and have been cared for and protected by their parents. Kenley, the youngest sister is outspoken, where as Noelle, the middle sister is modest. The oldest sister, Milandra is the arrogant one. Time will tell if they can handle the manipulative, Aniyah Sanchez, a woman from their father’s past.

2.From how the synopsis reads, there is excitement from start to finish – especially from the time the three rich sisters walk in on their father to only find him dead. Is this your first time writing such an intense drama, and if so, was it a challenge for you to relay in writing the depth of emotion that your characters would go through in such a dramatic scene?

Christine Young-Robinson:This is not my first time writing an intense drama. Being a low-key person myself, it is a challenge to transform in writing the emotions of the dramatic roles of my characters. But I love stepping out of my comfort zone into the world of my characters.

A compelling story about three sisters who come from a family of wealth—and whose lives are shattered by tragedy, scandal, secrets, and betrayal.

The three Houston sisters, Milandra, Noelle, and Kenley, are enjoying a regular day out with their mother, when they come home to find their father lying on the floor—dead! Overcome with shock, their mother falls down the stairs and dies at the feet of her daughters.

Despite their grief, the sisters start to make discoveries about the shadowy past of their father—one of South Carolina’s wealthiest men. Soon questions arise: Is there really a fourth Houston sister? And what are the true identities of Tessa, their former housekeeper, and Aniyah Sanchez, a mysterious and seductive woman who shows up at the funeral?

Worse still, the sisters are devastated to find out that Aniyah has inherited their home, the Houston Estate, and they must move out. Will Milandra, Noelle, and Kenley fight back, or will their fortune stay in the hands of this wild woman from their father’s past?

3.Who is your favorite character in “We Didn’t See It Coming” and why? Also, who was the most difficult to write? Explain…

Christine Young-Robinson: I love each character for their unique contribution to the storyline. Aniyah Sanchez was my most difficult character to write because she is vindictive and ruthless.

4.Of course, We Didn’t See It Coming will be available across all platforms – Amazon, Nook, iTunes, paperback, in stores and online, but the question I would like to know is this – is there room for or will you be writing a sequel/spin-off of the book?

Christine Young-Robinson: Yes, there will be a sequel. The manipulative, sexy, money hungry, Aniyah Sanchez, has her eyes on disrupting another family’s home. “Do What You Gotta Do”.

There’s all the book tea on the upcoming “We Didn’t See It Coming”,and you heard here first – there will be a sequel titled “Do What You Gotta Do”! This book is already on my BOOK TEA list! Find out more about Christine Young-Robinson below. To pre-order/order – click the book cover at the top!