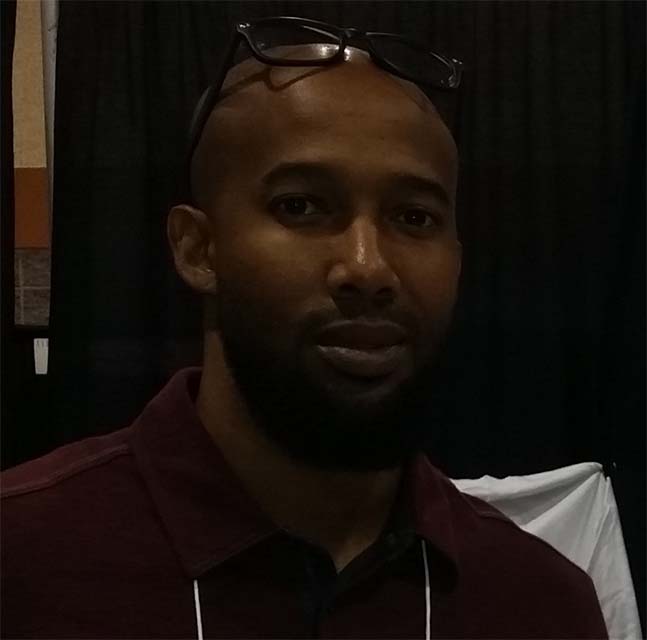 Author Daniel Neslon is a part of The Makings of a Man Foundation in the literacy program of the foundation, and he accepted my request for an OFF THE CUFF with him about his book titled I: The Emolian Empire

while attending the 2015 SC Book Festival.

He gave me insight into what the literacy program focused on and then went on to inform me about his fictional fantasy.

“I’m in the literacy program for the Makings of a Man Foundation…which inspires young men to get out and read books, whether they be fiction or non fiction”

“I: The Emolian Empire is a fictional fantasy novel, part one of three, about a young boy that finds out he’s destined to rid his world of the greatest evil. At a young age he finds this out, [so] he has to deal with that, learn about all of the powers he possesses as well as him being a child of a single parent, moving from one location to the next on his journey, finding out about all the things that he’s capable of – freeing his mind so that he can access all of his powers and things of that nature. It’s a pretty rough journey for him, but he figures it out.”

What are some of the obstacles that young men have to face today?

“Some of the obstacles that young men have to face are finding themselves in the world. That’s probably my character’s most basic plot or theme in the book is him just trying to find himself. Like I said, this is part one of three, and in this book, he actually finds himself by the end, and he’s able to protect those he was sent out to protect.”

“Come, come and find your deaths in your attempt upon me. Pray to your creator as I pull the life from your bodies and devour your existence. There is no avoiding my wrath neither now nor in the days ahead. Even if you succeed in putting me behind this door, I will one day be freed and come to slaughter the rest of you. Let it begin!” —The Great Beast of Xahmore

Blenadrene’s eyes began to glow green, and he breathed in very slowly through his mouth. Praylonese screamed out in pain. Blenadrene was sucking the very energy from him. Before Blenadrene could siphon enough energy to fight his way to freedom, the deep voice boomed throughout the temple again, speaking an ancient demonic tongue. Brown cloth strips then came from the ground and wrapped Blenadrene’s wrists and snatch them from the red wizard’s face. More strips ensnared his feet holding him in place. He struggled to free himself but could not. Then numerous cloth strips came from the hole he had left and snatched him down to the ground and mummified him up to his neck. The strips then snatched him from his feet to his back slamming him harshly to the floor. “Now, pull it from his head and bring it to me!” said the voice in the darkness. —Blenadrene’s confinement

Read I: The Emolian Empire now! Daniel Nelson III’s book sounded very intriguing, and as I’ve stated in my previous interviews, it’s rare that I interview authors of fantasy.  The great thing about it is that I ran into two very interesting fantasy writers at the festival, and Daniel Nelson III is one of them.  Get his book today as it is available online everywhere.

Categories Interview Exclusives, OFF THE CUFFSTagged Daniel Nelson III, I The Emolian Empire