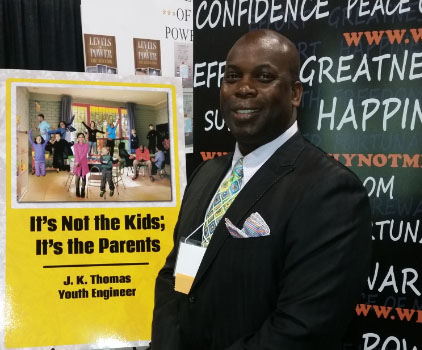 During the SC Book Festival, I had the opportunity to meet and do and OFF THE CUFF with author, speaker, youth engineer and mentor, J. K. Thomas about his debut book It’s Not the Kids; It’s the Parents. He had so much information to give based on his own experience, having cared for children for twenty years in his own business, therefore, I couldn’t wait to find out what was not only on his mind but inside his book as well.

“It’s my first book. I released it November 2014. The title is It’s Not the Kids; It’s the Parents

. Actually, I own my own daycare business, and it’ll be twenty years in June. A lot of people kept asking me, how can you deal with the kids? I kept saying, it’s not the kids, it’s the parents

because usually it’s the kids I can manage, but it’s the parents that usually gave me the trouble.

So I started putting that to the book, and I also realized that a lot of issues that we have with our kids come from the parents. No matter what we tell the kids, the kids are ultimately watching us more than listening to us.

The book is about self value and self worth but within those who work with kids, parents as well as mentors, coaches, counselors, doctors…so in order for the kids to get better, we have to get better. It deals with everything from forgiveness to…health.”

He cares for children between the ages of five and thirteen, which are school age children, and he also let me in on the fact that he “does a lot of mentoring and tutoring for adolescents and teenagers as well.”

“Actually, I have a seminar August 8th 2015…I’m from Baltimore, Maryland.”

As soon as he said that, I interjected being that the state of that city was very hostile after the death of Freddie Gray as a result of police brutality and negligence, leading to widespread protests in the city, from school age children to adults. I wanted to get his opinion on the situation and what he felt could help, or assist, the children to deal with what’s going on today.

“One of the best things is to actually go back and learn their history because a lot of kids forget where we came from, a lot of things are ignored or just not even taught. And so I think if they had a history of where we came from, they will respect where we are, and take that from there. There are a lot of adults out there that have a lot of information. I think a lot of the teens want to jump straight to the internet and learn things that way and not look at something as simple as learning how to sew, learning how to tie a tie, put a belt on, pull their pants up…just basic hands on things which are very crucial for survival, day [to] day stuff that’s just a forgotten art.”

Find out more about JK Thomas and his book right now at his website where you can also purchase the book It’s Not the Kids; It’s the Parents! (Also available on Amazon)

Categories Interview Exclusives, OFF THE CUFFSTagged It's Not The Parents; It's the Kids, JK Thomas, SC Book Festival